Officials with the Louisville Metro Police Department (LMPD) said the shooting officers engaged in was because Kenneth Walker, Taylor’s boyfriend, fired the first gunshots at them. However, allegations in the lawsuit say police failed to identify themselves and that Walker who is a licensed gun owner thought someone was breaking into the house. Walker nor Taylor both did not have a criminal history of violence or drugs, the lawsuit reveals.

Taylor was employed as an EMT for emergency rooms at two hospitals and assisted with the coronavirus response, her family stated. “Breonna loves life and she loved to help people and she loved her family. She didn’t deserve what they did to her,” her mother Tamika Palmer said to CBS News correspondent Jericka Duncan.

“I was more concerned for her washing her hands than her dying at home,” Palmer mentioned. 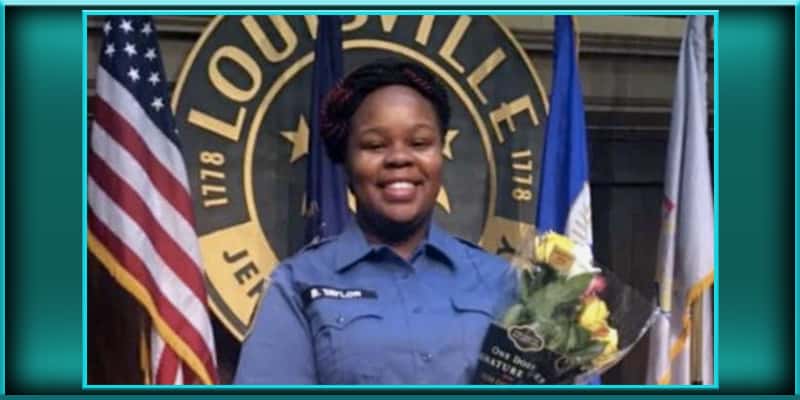 The lawsuit reveals the officers had a search warrant to “knock and announce” at Taylor’s apartment and were searching for a male suspect who lived in a different area of Louisville who LMPD already took into police custody the day before.

The search warrant names two men, Jamarcus Cordell Glover and Adrian Orlandes Walker, who claimed they were observing packages being transported that they suspected contained drugs from the Taylor home address. Kenneth Walker was not named in the search warrant.

Allegations in the family’s lawsuit claim “The officers then entered Breonna’s home without knocking and without announcing themselves as police officers. The Defendants then proceeded to spray gunfire into the residence with a total disregard for the value of human life.” Breonna Taylor was shot by bullets eight times.

The lawsuit says Taylor and Walker “believed the home had been broken into by criminals and that they were in imminent and significant danger.”

Police gave a different story and said the officers knocked on the door, announced their presence, and that when the officers forced their way into the home they were “immediately confronted by gunfire.”

Police said Mattingly was struck by a bullet in his leg. Walker is facing first-degree assault and attempted murder of a police officer charges.

Mattingly, Cosgrove, and Hankison have all been placed on administrative reassignment while an internal investigation is conducted. “The Public Integrity investigation into this case remains ongoing, therefore it would be inappropriate for us to comment beyond what we already have said immediately following the incident,” the LMPD said in a statement on Monday to WLKY.

The lawsuit talks about Hankinson and Cosgrove having a history of using force while on the job. The lawsuit claims that in a separate case Cosgrove shot a Louisville resident seven times and alleges Hankinson has been in “dozens of situations where he has sent citizens to the hospital for injuries from being tased, pepper-sprayed and struck repeatedly in the nose and eyes.”

Ben Crump the family’s attorney, who also represents Ahmaud Arbery’s family said Taylor and Walker “thought they were being burglarized.”

“Does the Second Amendment not apply to African Americans? This was a completely unnecessary and unjustifiable killing of an innocent woman,” Ben Crump mentioned.

Mayor of Louisville Greg Fischer released a statement that he is waiting for the results of LMPD investigation into the case. “As always my priority is that the truth comes out and for justice to follow the path of truth,” Fischer stated.

Governor Andy Beshear said in Tweet on Wednesday that reports about Taylor’s death are “troubling.” “Her family and the public at large deserve the full facts of her death,” Beshear announced, and called on state-legal officials to review the findings of the internal investigation “to ensure justice is served.”

The people of Louisville and many other Americans are still wondering why the officers involved in the fatal shooting of Breonna Taylor still haven’t been criminally charged, and this may be why her family filed the lawsuit, to seek overdue justice.