(The AEGIS Alliance) – IMPORTANT: Rumors that Enzo Vincenzi used to be a drug dealer are blatantly false.

The unlawful public corruption cover-ups, domestic stalking, domestic terrorism, extortion, racketeering, and conspiracy to solicitation of murder for hire crimes committed by Sheriff Mike Scott has allowed Miriam Pacheco to immeasurable damage of Enzo Vincenzi’s hotel business and property. This has unlawfully deprived Enzo Vincenzi of his legal rights to earn his living from his business and to be able to provide for himself and to pay the taxes. As of this day, the fraudulent high over-assessed tax-delinquent liens have placed him and his property at risk.

This is the same Modus Operandi that Tax Auditor Tim Parks unlawfully engaged in by placing Florida State motel/hotel tourist tax fraud liens in the amount of more than $37,000 in an attempt to foreclose the property and hotel business.

Sheriff Mike Scott allowed Miriam Pacheco to steal his hotel and operate his business that he fought the theft of his property for five years before the Lee County Courts System returned the property to him. During the five years, Miriam Pacheco allowed the hotel property and two-bedroom house to deteriorate by not providing any upkeep or maintenance repairs, which allowed and caused his hotel business to be in a condition that is unprofitable and his home unlivable.

Miriam Pacheco arrived in the United States on Fidel Castro’s Mariel Boat Lift from Cuba. Miriam Pacheco stole the hotel business and embezzled the income for more than five years until the Lee County Courts recognized that Miriam Pacheco had unlawfully obtained the real estate property by fraud, engaging in an organized scheme to defraud and the exploitation of an elderly and disabled person.

Given the fact that Miriam Pacheco arrived here on the Mariel Boat Lift as a criminal that even Fidel Castro recognized Miriam Pacheco as a dangerous criminal, we question the fact if Miriam Pacheco is here in this country legally and if she is here legally, who is responsible for granting occupancy when she committed federal felony offense crimes before and after she arrived in these United States of America?

Miriam Pacheco has harmed Enzo Vincenzi and engaged in murder for hire conspiracy crimes, and admitted that she attempted to hire someone to kill Enzo after Judge Fuller granted Enzo the recession of deed and returned the property back to Enzo. She then tried to hire someone to murder Enzo on two separate occasions in the solicitation of murder with two different people to have Enzo murdered, as revenge for winning his real estate verified cross-claim court case No. 08-CA-007214 against her.

It is prudent that these crimes be investigated, committed by Sheriff Mike Scott and Miriam Pacheco’s unlawful actions in these matters as well as other cases and issues that have been brought forward by others against Sheriff Mike Scott.

The public corruption cover-up and domestic terrorism crimes they have openly committed in Lee County warrants an immediate investigation by the U.S. Department of Homeland Security and the President of the U.S. 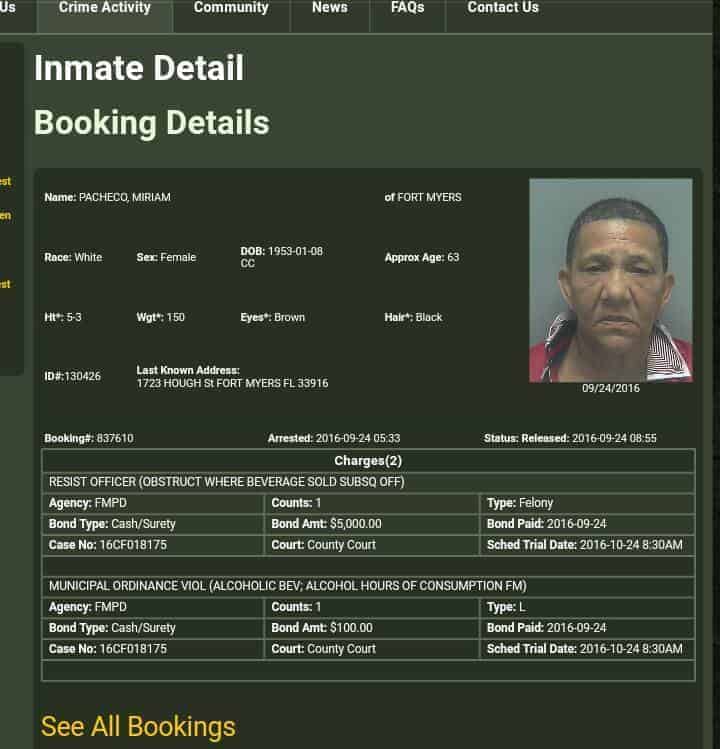