Kyle James Lee
Majority Owner of The AEGIS Alliance. I studied in college for Media Arts, Game Development. Talents include Writer/Article Writer, Graphic Design, Photoshop, Web Design and Development, Video Production, Social Media, and eCommerce.
Share
Twitter
Linkedin
ReddIt
Facebook
Pinterest
Mix
Digg
Tumblr
Naver
VK
WhatsApp
Telegram
LINE
Viber
Email
(ANTIMEDIA) — Though the profitability of Black Friday may be wearing off due to the growth of online retail and consumers’ desire to avoid crowds in shopping centers, 2017’s day-after-Thanksgiving sales have once again drawn hysteria and violence. The consumer holiday has resulted in at least one shooting in Missouri, multiple fights, and chaos around the world.

At the same time, many shoppers and outlets are reporting eerily empty stores in stark contrast to years past.

Here are 12 images and videos that show Black Friday is alive and well in some places — 2,500 people reportedly gathered at the Mall of America before it opened — and dying down in others:

One brawl in Alabama caused the whole mall to shut down:

JUST IN: @HooverPD say they responded to several reports of fights at the Galleria Thursday night. Here's video of one incident outside the Buckle store. More on @WBRCnews this morning. pic.twitter.com/UZEZQGykGE

Stores like Best Buy started early on Thanksgiving day, drawing lines at locations around the country:

800+ Shoppers lined up outside of Best Buy in Irving. #BlackFriday pic.twitter.com/9FkEAupCkk

A fight at an undisclosed location appeared to show a man getting thrown through an aisle for touching another shopper’s basket:

This is by far the calmest black friday ever pic.twitter.com/EwErZ9EF1S

It's almost 9:30 and this is our line. I'm fine with this. pic.twitter.com/JJ5fxR0HGs

In other parts of the world like South Africa, however, America’s Black Friday tradition goes on:

A scuffle breaks out outside The Checkers in the Eastgate Shopping Centre. #BlackFriday @TeamNews24 Plenty of security guards on duty. pic.twitter.com/R6ihJUkCte

A view from within the mad trolley dash. #BlackFriday @TeamNews24 pic.twitter.com/0zs21J2lE1

A store’s glass doors were broken and alarm scanners were ripped up early this morning by #blackfriday deal seekers. It is understood that police were called in to control the crowd. #blackfridaydeals pic.twitter.com/4agpL7sSuR

In Brazil, where Black Friday continues to grow in popularity, shoppers grappled over televisions (see 3:10 in video):

Meanwhile, in Ukraine, a lone radical feminist with “BLACK FRIDAY” scrawled on her torso attempted to trash a store owned by Ukrainian president Petro Poroshenko, who the U.S. State Department once considered their “Ukrainian insider.”

She was eventually removed from the store.

Even if Black Friday 2017 doesn’t produce as much recorded chaos as it has in years past, it’s no doubt still woven into the fabric of American culture, as evidenced by this tweet: 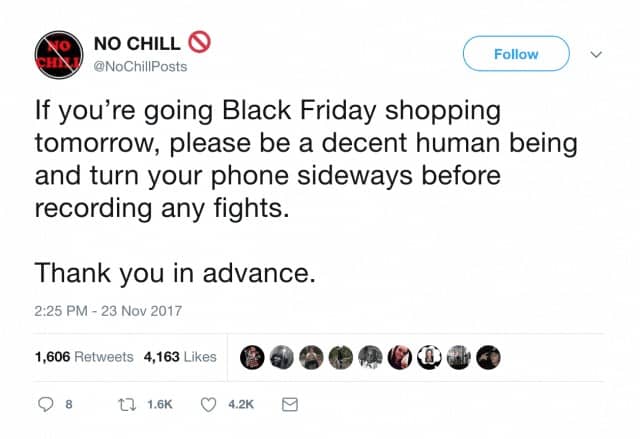