(The AEGIS Alliance) – Lee County Florida- Mike Scott is one of The United States’ more infamous county sheriffs, a mouthpiece for conservative policing who runs a department that has been at the center of multiple controversies and more controversies. On top of all this, the department and circuit court are now being accused by one local man of false imprisonment, unjust arrest, and a massive cover-up surrounding it all.

This article will be a part of an ongoing series showcasing the alleged corruption inside the Lee County Sheriff’s Department that has embodied itself in the form of the persecution of one man; Scott Goodyear.

Goodyear alleges a conflict with the department spanning over a decade but culminating in the events outlined in this piece after he sent an email directly to sheriff Mike Scott threatening to “hogtie” him and take him to Washington to have him held accountable for the department’s corruption. This kicked off the most recent events in the case that started with Goodyear’s arrest on November 4th, 2015.

The corruption, Goodyear alleges, includes a bug that was removed in his home, the hacking of his phone, and most blatantly; the falsifying of documents including affidavits and search warrant.

Upon review of the documents, it seems that the department was unclear what exactly they were looking to charge Goodyear with and that they may have backdated the documents to justify their searches. The searches of Goodyear’s home were also conducted by the narcotics/vice units despite him eventually being charged with making threats against Mike Scott. The LCSO entered his home without Warrant on video at approximately 7:18 pm Nov 4th, 2015. The Swat team then closed up the house as Detective G. Monmany placed Goodyear in the back of his patrol car only being “Detained” explaining to him he was not the arresting Detective on the case. While his mother Katherine Goodyear video tapped.  Det Loughren arrived back at 945pm with alleged Warrant after already entering his home.

Starting with the affidavit for the search warrant the paperwork does seem somewhat suspicious. The most blatantly obvious mistake is the date on the final page of the affidavit where the date was crossed out from where November 5th was written over with a 4. It also seems the email that sparked the request for the search warrant was doctored to seem more threatening than it was, it was originally written as more of a dare for Mike Scott to confront Mr. Goodyear. The email differs from that in the Affidavit: The next step of the paperwork involved in searching a home is the actually approved warrant. The warrant’s first page includes a photo of Mr. Goodyear’s home which he says was taken at a much later date after the raid was carried out. Mr. Goodyear sent a photo of his home with a brown garage door but the photo included in the warrant shows his house with a white garage door and is apparently the photo from the database kept by the Lee County tax appraiser’s office. The house in the search warrant isn’t the same as his actual house imaged below: Following this are the reports written by a Detective Monmany who assisted in “serving the warrant” on Mr. Goodyear. At the time Monmany arrived on the scene there was no warrant.  Mr. Goodyear claims at this point after the raid on his house by the narcotics/vice team he was taken to Det. Monmany’s vehicle and held for around two hours. Monmany says Goodyear was only held a short period of time while Monmany “ate his lunch” in the front seat. They say it was after this extended period of being held in the car without a charge that Goodyear was served with a warrant; making it hard to believe that even by the official line of events is to be believed that there may have been no warrant at the original time of the raid.

The Detectives statement doesn’t match the events in the video: There are going to be more court documents and details to come in the near future. Once we have some more clarification and a long history of Mr. Goodyear’s case against the Lee County Sheriff it should become more apparent that there is a larger conspiracy to cover the department’s wrongdoings going on behind the scenes. Anonymous entities question’s why Judge Ramiro Manalich would sign an Affidavit for a Warrant after the fact, and we believe no Judge would alter a date on such an important document. Our review of these facts has also found that Judge Ramiro Manalich was not even working at the time to sign a warrant. Goodyear has been on bond on this charge for over 14 months to date. After more review, it seems to be a great conflict that the State Attorney Stephen B Russell could be a witness against Goodyear on this case and also prosecute him at the same time.

The date had been altered: Here are some of the documents into text for language translations sake:

Before me fake signature Ramiro Manalich, Judge of the Circuit \ County Court of the Twentieth Judicial Circuit, in and for Lee County, Florida, personally appeared Detective Christopher Loughren, a certified law enforcement officer of the Lee County Sheriff’s Office, and member of the Vice/Narcotics Unit, who first being duly sworn, deposes and says that he has probable cause to believe and does believe that the laws of the State of Florida have been violated, to wit:

Affidavit for a search warrant:

Your affiant does swear or affirm that the facts contained within this affidavit and applications are true, correct, and accurate to the best of his knowledge under penalty of perjury.

Judge of the Twentieth Judicial Circuit

At 2155 hours, Goodyear was transported to the Major Crimes Unit interview room at Central District.

During that time, Goodyear began to cough up blood at which time EMS was called to the scene.

Detective Pavelski was unable to interview Goodyear at this time.

Before me Ramiro Manalich, Judge of the Circuit \ County Court of the Twentieth Judicial Circuit, in and for Lee County Florida, personally appeared Detective Christopher Loughren a law enforcement officer of the Lee County Sheriff’s Office, and member of the Special Investigations Division Narcotics Unit, who first being duly sworn, deposes and says that he has probable cause to believe and does believe that the laws of the State of Florida have been violated, to wit:

The evidence connected with the crime is currently being contained, stored, or concealed within a single-family home located at 1115 SE 30th Terrace, Cape Coral FL, Lee County, Florida more particularly described by the affiant as:

The evidence sought within the dwelling is to include, but not limited to:

Sheriff Scott stated that he received the following email on November 4, 2015, at 3:45 p.m. from Goodyear to his Sheriff’s Office email address. The email stated: “Mike, I’m going to jump out of the bushes and tie you up and put you in a trunk and deliver you and Steven B. Russell the State Attorney did me. I am making a threat on and Elected Official please pick me up and I will do it to you right then, come yourself. You have committed numerous Conspired activities pertaining to myself and charged Deanna Futch for phone hacking now huh? I was never going to let you up by the way. Thanks for not believe me. LOL!!!”. On the bottom of the email has: “Sincerely Scott Goodyear 1115 SE 30th Terrace Cape Coral, FL 33904.

Due to Goodyear stating in the email that he is going to jump out of the bushes and tie Sheriff Mike Scott up along with other threats. Goodyear is under arrest for Florida State Statute 836.10 Written threats to kill or do bodily injury; punishment. The Statute also reads that any person who writes or composes and also sends or procures the sending of any letter, inscribed communication, or electronic communications, whether such letter or communication be signed or anonymous, to any person, containing a threat to kill or do bodily injury to any member of the family of the person whom such letter or communication is sent commits a felony of the second degree. Goodyear while being detained, and sitting in the rear seat of Detective Monnasy’s vehicle, spontaneously uttered that he sent an email to a federal government official and that he was going to take him to Washington DC and drop him off there so the government can handle him. 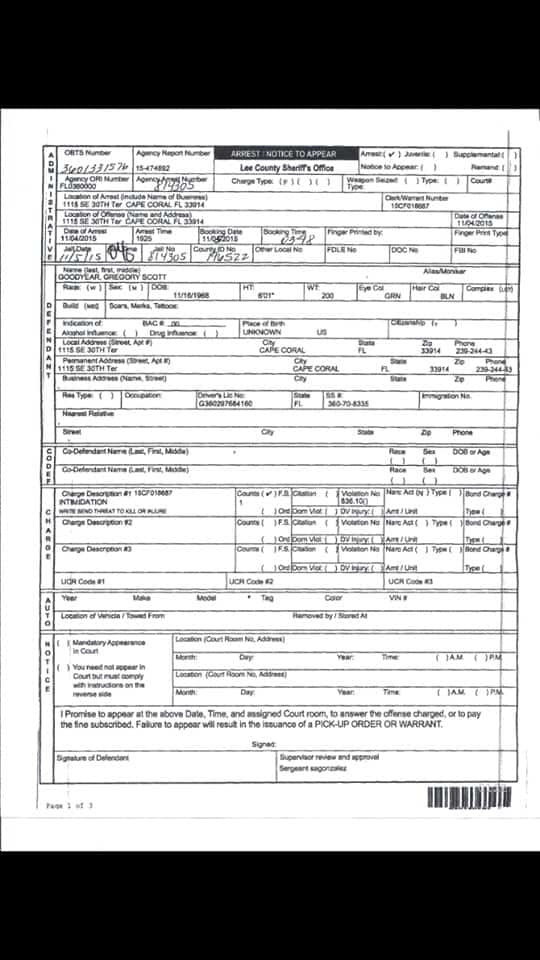 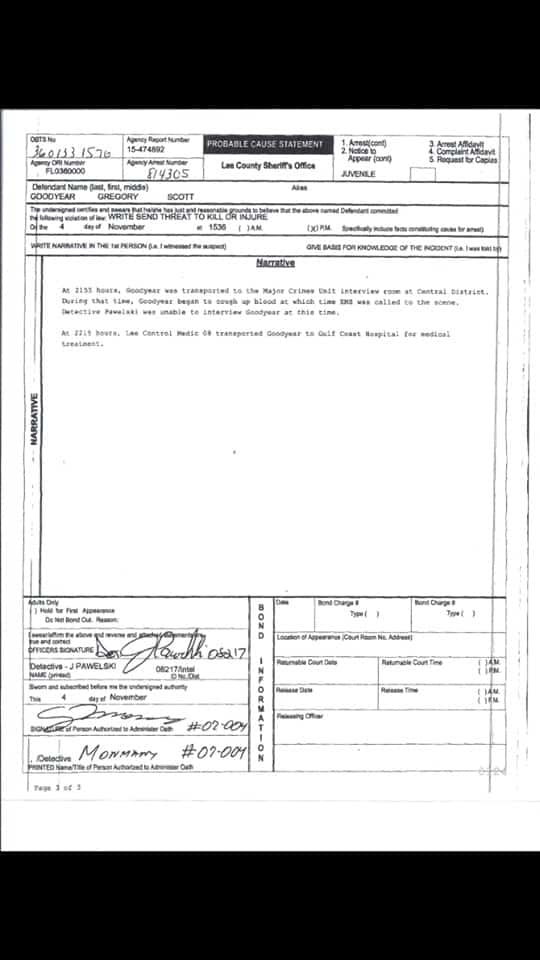 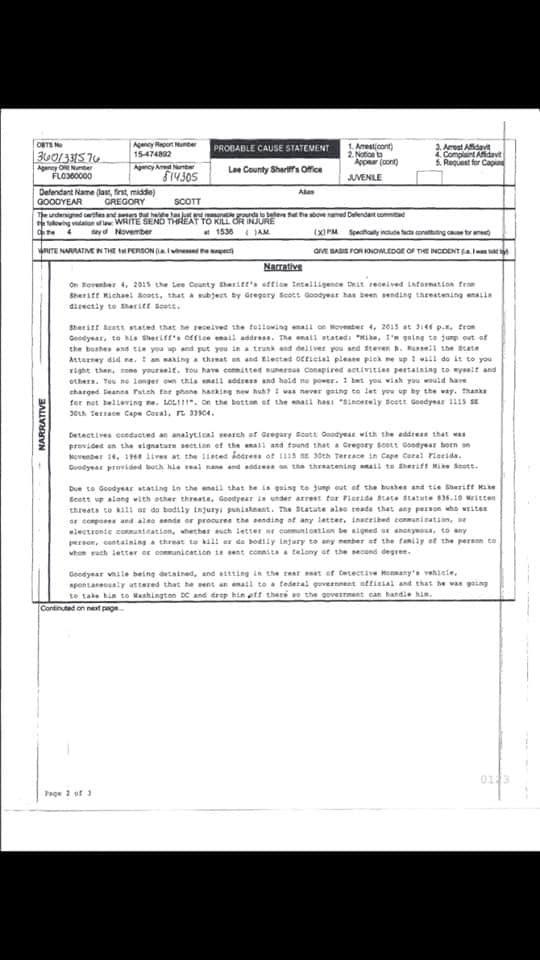 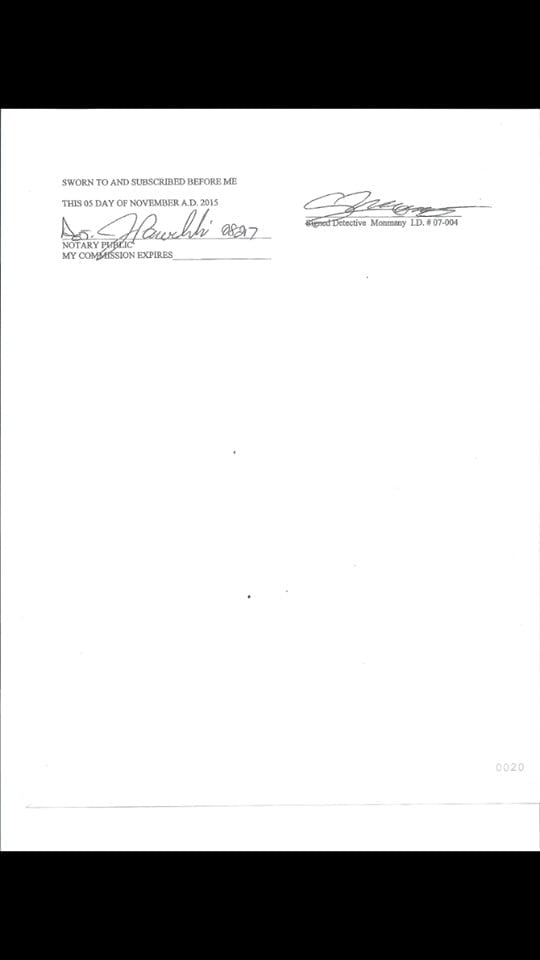